BurnRun evolved as an idea to raise much needed funds and then to distribute some of these funds to the HeroBurn Foundation that provides support and creates awareness of burns and burn victims.

An epic event, raising funds in conjunction with Port Shepstone Round Table

IT’s all about the numbers

The route was along dirt roads (where possible) – from Port Edward to Langebaan – in 7 Stages, enduring a 7 day trip to get there. Total distance is 1802kms, and this should take 37 hours.

Stage 1 was the first day and opening of the event. We travelled form Port Edward to Port St Johns, via Mtentu Gorge, Holy Cross and on to Lusikisiki.

The route was great however with some 120kms the heavens opened and subjected us to a downpour of biblical proportions. We arrived in Lusiki rather wet and bedraggled but still full of excitement for what was to come.

The rest of the way was via the normal tar road and we arrived at our accommodation, the Jetty River Lodge, ready for a great lunch at the famous ‘Jungle Mokey”. Day 1 complete, what a start!

Stage 2 had to be called off due to adverse weather and road conditions.

This road would have seen us travel to Coffee Bay via Umngazana and Mpande and then onward to Hole in the wall. As three of the vehicles on tour where hired cars for Avis, they were not kitted out with off road tyres and as such a decision was made to go around via Umtata. The convoy stopped outside Coffee Bay and unloaded the bikes for a quick 10km travel in to Hole In The wall.

It was at this point that Leon ‘donated” his Iphone X y leaving it on his bikes seat and Rudi Prinsloo endured mud in the eye, from Johnny on the quad.

Arriving at Hole in the Wall, Jakes was not to be outdone, and “gifted” us with a flat front tyre. After this was completed, the team took a short drive to go and admire the legendary hole in the wall. Of course cooler boxes were packed. Then it was back to First resorts Hole in the Wall hotel for an excellent meal and perfect lodgings.

Hole in the Wall > Stutterheim

Stage 3, and things seemed to get real overnight.

This stage never seemed to end. We traveled to Stutterheim via the Mbashe Hydroelectric power scheme and upon our exit, Team Sandown, jean and Jacques, damaged the jeeps shock absorber mount and this required some roadside repairs, all duly assisted and overseen by Doc De Beer.

The rest of the trip was spent admiring some beautiful areas and saw the team drop into numerous valleys and enjoy the same amount of climbs out.

One of the crossings involved a quick sojourn along the N2 national highway and we all created some consternation, especially Johnny on the quad.

We arrived in Stutterheim at about 17h30 and endured possibly one of our longest days. Sore feet and bikes running on the smell of fuel, but we made and spent a wonderful night with Stutterheim Round Table.

Retiring to The Courtyard bed and Breakfast to recharge batteries and prepare for Day 4!

Stutterheim to Kirkwood – Thumbs UP!

Day 4 was meant to see us travel to Kirkwood via Keiskammahoek and then through the great fish river reserve and on to Kirkwood via Addo. However, a faulty GPS, led to a partial amputation of a thumb by Rudi Prinsloo and this necessitated a “small” detour to East London to get it sorted.

As one of the KTM’s was being loaded, the bike shifted forward on the trailer and it caught Rudi’s thumb between the brake disc and the caliper itself. Lucking this wasn’t a complete amputation, but the injury was serious enough.

Drs De Beer and Mathee transported Rudi via road and Patrol to East London and Team Blonde took the quad trailer via Grahamstown to Kirkwood. It was decided that the two bikes and bike support vehicle, Piloted by Tom Pearson, should find a round and proceed as best as possible.

Computers were opened a route was chosen and together with the Sandown Jeep, the road was travelled.

We reached Kirkwood in the early evening and immediately departed for a great ‘steak” evening with Kirkwood Round Table. Imagine our surprise when we arrived only to find all the Round Tables form the Eastern Province Area present and waiting for us.

The evening reached its pitch with a cheque handover of R16000. Moneys collected form all the Round tables in the area. Tears were shed as emotions ran high. We retired to our guesthouse, the Chameleon Guesthouse in Kirkwood for a solid nights rest. 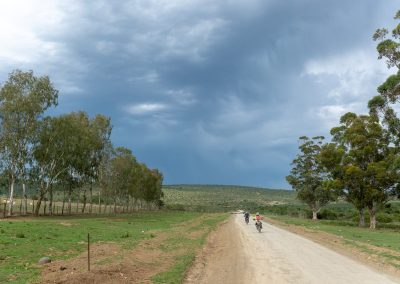 KirkWood to Prins Albert – The longest day of the trip.

This saw us travel the outer Baviaans through the Karoo area to Willowmore and then on to Prins Albert. By far an large the most scenic day of the trip as well. One of the greatest feelings on this leg was the growing sense that we were going to make it, we were actually closer to Langebaan than home and are goal was getting in to sight.

The road took its toll on the Sandown Jeep as we had to stop for running repairs to the exhaust as a bracket broke. This was quickly repaired and we were back on the road again to Willowmore. From Willowmore we endured a seemingly never ending stretch of roadworks that finally culminated in our reaching of the stages final checkpoint and then a small drive to Prins Albert.

The wonderful town of Prins Albert accommodated us and fed us like we were champions.

I cannot extend a big enough thanks to the Tourism Department of Prins Albert and all the wonderful establishments that gave so generously towards the cause. The day ended with a brilliant meal supplied to us by the Karoo Café, thank you Brent Phillips White.

Prins Albert to Ceres – We endured a great send off the morning of Stage 6 form the Swartberg Hotel in Prins Albert.

Bikes where trailored as there was a 150km stretch on the N1 to Laingsburg before the days riding started.  Never underestimate the power of a wimpy burger! LOL, Burgers where quickly procured at the Laignsburg 1-stop and the days riding commenced. We travelled through the picturesque valley of the Witteberg.

The road was brilliant and the scenery picturesque, this however didn’t last long and we were on the N2 travelling to Matjiesfontein, where we took the Sutherland turnoff and proceeded to Ceres via the R353, Groot Rivier road. Contesting trucks the size of Road Trains and dust clouds of desert storms, we finally came out just before the town of Ceres and Rudi Prinsloo decided to climb on his bike and ride the rest of the way in to tow. The

Team settled in to the luxurious accommodation in Wolesley provided to us by Big Sky Cottages. A great evening was spent around the pool and the braai was extremely welcome. (So where one or two alcoholic beverages LOL!)

Ceres to Langebaan – The final stage.

Mixed emotions existed in the morning as it became very clear that the trip was nearing its end. The team travelled to darling via Riebeek Casteel. The first set of roadworks was encountered some 90km out of Ceres and at this point, the 35 year old Landrover of Team Blond (Fondly called Jaeger) proclaimed: “To here and no further”.

Now before you Landy haters reading this say; “Typical” this vehicle had given us no trouble up to this point, hadn’t even used (or leaked) a pint of oil. After much consultation the root cause was determined to be an 80amp ignition fuse that simply rattled itself apart ad disintegrated. A team was dispatched to fetch a new fuse but unfortunately the unit could not be found. So between Doc and Team Sandown, the fuse was “bridged” and the replaced.

Breaths where held and as the ignition key was hesitantly turned, Jaeger erupted into life.

And so the journey continued. Unfortunately the roadside repair set us back somewhat in time and the team decided to trailer the bikes through Riebeek Casteel, however the bikes quickly came off and we rode onwards and through the town of Darling. The team arrived at the entrance gate of the Langebaan Reserve and the bikes were prepped for the last stretch. The trip through the reserve was epic and the townsfolk of Langebaan seemed surprised at the sight of our Convoy of vehicles and MX bikes travelling through.

A mounting feeling of sadness but still coupled with accomplishment and pride started mounting as each turn of our wheels brought us closer to Club Mykonos and the end of this most epic trip. The final turn was made and we were welcomed into the resort as hero’s and heroines, titles richly deserved by a great team who achieved something never before undertaken. BurnRun 2019, what a trip